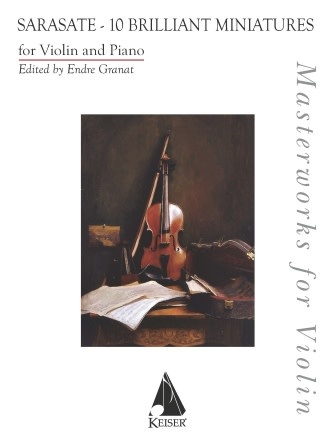 Sarasate's concert career began at age seventeen after he was awarded the coveted Premier Prix from the Paris Conservatoire for both violin and composition. After his London debut, the playwright and music critique George Bernard Shaw wrote in his review that Sarasate 'left criticism gasping miles behind him.' Shaw also declared that there were many composers of music for the violin; there were but few composers like Sarasate for violin music. His vast concert repertory included many works written for and dedicated to him by Bruch, Saint-Saëns, Wieniawski, Dvorak and many others. He performed his own works in an inimitable, brilliant and charming manner. His contemporaries marveled at his perfect intonation and stunning rhythmic acuity. His bowing technique was the pride of the French School of violin playing. The works presented in this volume are among his finest. All are based on Spanish popular music and are a virtuosic set for violin and piano. They are and have been in virtually every great violinist's repertory. They are also exceptionally popular as encore pieces, as well as favorites of budding virtuosos.