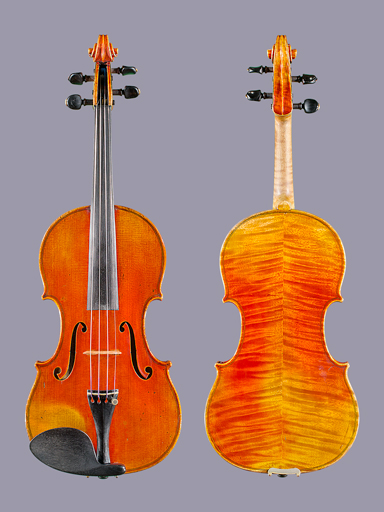 One of the most prolific French makers of the 19th century, Paul Blanchard made roughly 1200 instruments in his lifetime, including violins, violas, and cellos. Born in Mirecourt, he apprenticed under Auguste Darte beginning in 1865. He then worked for Vuillaume before settling in Lyon around 1875, where he became official luthier to the Lyon Conservatoire. Until about 1885 his instruments owed much stylistically to those of Silvestre, with thin purfling, while later the purfling becomes wider, the top and back less hollowed at the edges. This 1896 violin highlights the full spectrum of his refined artisanry.

The back is formed from two pieces of quarter cut maple, with handsome medium flame slanting downward from the center joint. The wood of the ribs and scroll match the back and are outlined in black - typical of French instruments of the time. The grain of the two-piece spruce top is straight, narrow, and even. The elongated F-holes highlight Blanchard’s delicate craftsmanship. The instrument is varnished a lovely reddish-brown, with shading and antiquing that reveals a beautiful golden-brown ground.

This violin is absolutely lovely to play. Its even tone allows the musician to fully express their artistry. A sound matured over time, it is sweet and rich in overtones, with an exquisite high register.

It bears a printed label that reads “Fait par Paul Blanchard à Lyon en 1896 no. 399.” The label also bears the maker’s mark, PB, and a border decorated with a Latin proverb: “Viva fui in silvis sum dura occisa securi dum vixi tacui mortua dulce cano” which translates as: “I was alive in the woods; I was cut down by the cruel axe. While I lived I was silent; In death I sweetly sing.”

The violin is in excellent condition.