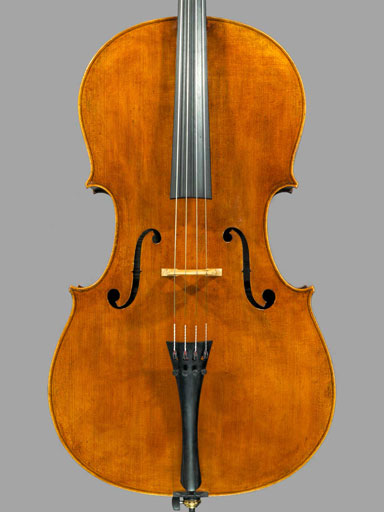 This cello made by the Boston-based team David Polstein & Christopher White is well balanced across all four strings with a particularly singing upper register. With easy playability, it also features a full, rich, and bassy tone.

The back is formed from one piece of quarter-cut maple, marked by narrow and irregular flame and a 4-inch knot on the lower treble side. The wood of the ribs and scroll are similar to that of the back, but with more regular flame. The two-piece spruce top has straight and narrow grain in the center, with the grain narrowing at the joint and widened at the flanks. The instrument is covered with a red-brown varnish that has been lightly antiqued by the maker, revealing a pale gold ground beneath. The cello is in new condition.

After graduating from the violin making program at the North Bennet Street School, in Boston, I worked for 6 years doing repair and restoration, with the violin maker, Arthur Toman, in Newton, Massachusetts.

Since 1995, I have focused on making instruments in my own studio in Newton. In 2003, in addition to making instruments on my own, I began collaborating with Chris White making ‘cellos and violas.  Over the years, I have won 10 awards in the Violin Society of America’s International Competitions, including 2 silver medals and a certificate of merit for violas made with Chris.

I am a member of the American Federation of Violin and Bow Makers and served for 3 terms as the Secretary of its Board of Governors. I am also currently serving as an advisor to the violin program at the North Bennet Street School.

My passion for music led me to double bass studies and later to violin making at The North Bennet Street School in Boston. Broadening my experience in the studios of Sam Zygmuntowicz and William Monical, I opened my own studio in Boston in 1991.

Since 2003 I have collaborated with David Polstein making violas and cellos. Our violas were awarded two silver medals and a certificate from The Violin Society of America.

I became a member of The American Federation of Violin and Bow Makers in 1994 and have served on The Board of Governors. For more than fifteen years I have been a regular substitute instructor for The North Bennet Street School, and also served as an advisor to the violin making program.