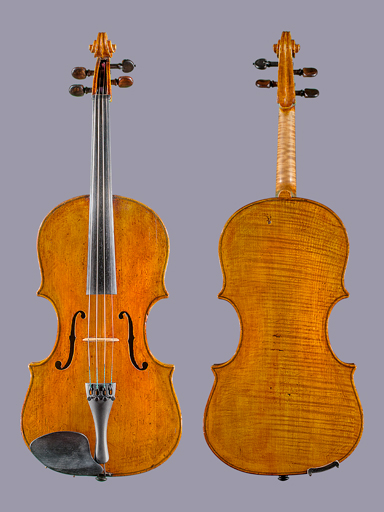 Carl Mettus Weis 17” viola, Copenhagen ca 1850, with label reading
“Anbas non oculis Hannia C. Weis”
Carl Mettus Weis (1809–1872) must be mentioned despite being an amateur. A true polymath, he studied law and became head of Denmark’s ministry of culture and church matters, thus becoming responsible for many cultural events. In his spare time he played string quartets with his three brothers and studied violin making with his friend Emil Hjorth, who at times found Weis a bit intense – according to the Hjorth family, he would spend hours simply watching Emil working! However, any aspiring violin maker had to be on good terms with Weis, since he was on the board of directors of several important organisations, including the Reiersen Foundation and the Royal Opera, and a recommendation from him usually resulted in grants for young violin makers to study abroad. In 1861 he published a short book about violin making. [2] His brother Andreas Weis (1815–1889) was likewise an avid amateur maker.