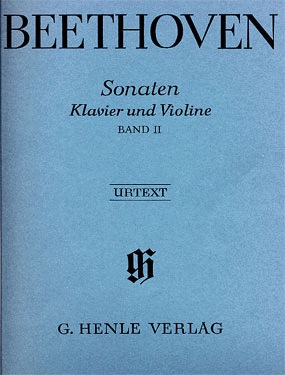 Ludwig van Beethoven wrote his ten violin sonatas during a period of just fifteen years, between 1797 and 1812. Using our carefully revised two-volume edition of the complete sonatas, the performer can observe with fascination how Beethoven refashions, and varies, the principles of sonata form in each work. What makes this Urtext edition particularly valuable is the fact that all the sonatas have been edited using the surviving manuscripts as well as the original print editions personally supervised by Beethoven. When laying out the text, our editor has attempted to preserve the layout of these sources as exactly as possible. Thus Beethoven's original notation is reproduced in strict conformity with these models, vividly elucidating the musical relationships desired by the composer. Along with an annotated part, an extra part without fingerings is included for violinists who want to establish their own approach to Beethoven's violin sonatas.