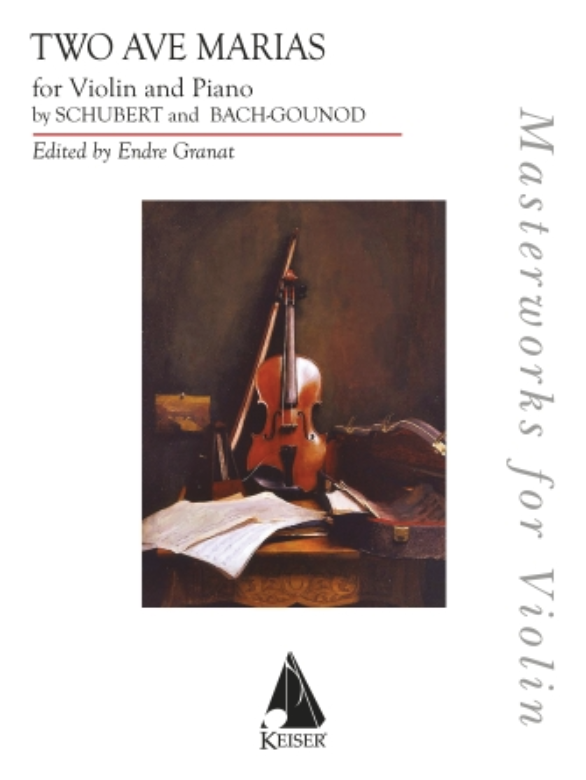 TWO AVE MARIAS FOR VIOLIN AND PIANO: BACH/GOUNOD AND SCHUBERT
Series: LKM Music
Publisher: Lauren Keiser Music Publishing
Format: Softcover
Arranger: Endre Granat
This one of a kind album pairs two of the most performed Ave Maria's for violin and piano, meticulously edited by Jascha Heifetz' protege, Endre Granat. The first of these is Schubert's melody, which was originally composed as a setting of a song from Walter Scott's popular narrative poem The Lady of the Lake, titled, “Ellen's Third Song” (Ellens dritter Gesang). The opening words and refrain of Ellen's song, namely “Ave Maria” (Latin for “Hail Mary”), may have led to the idea of adapting Schubert's melody as a setting for the full text of the traditional Roman Catholic prayer. The Latin version of the song is now so frequently used with Schubert's melody that it has led to the misconception that he originally wrote the melody as a setting for the “Ave Maria.” The second Ave Maria in this collection was created when Gounod famously improvised the melody over the background of J.S. Bach's Prelude No. 1 in C major, BWV 846, from The Well-Tempered Clavier. Gounod's beatiful improvisation was transcribed by his future father-in-law Pierre-Joseph-Guillaume Zimmermann, which was published with the Bach keyboard accompaniment in 1835 under the title “Méditation sur le Premier Prélude de Piano de S. Bach.” Alongside Schubert's version, the Bach/Gounod Ave Maria has become a fixture at funerals, wedding masses, and quinceañeras. Both works have been recorded hundreds of times during the twentieth century.