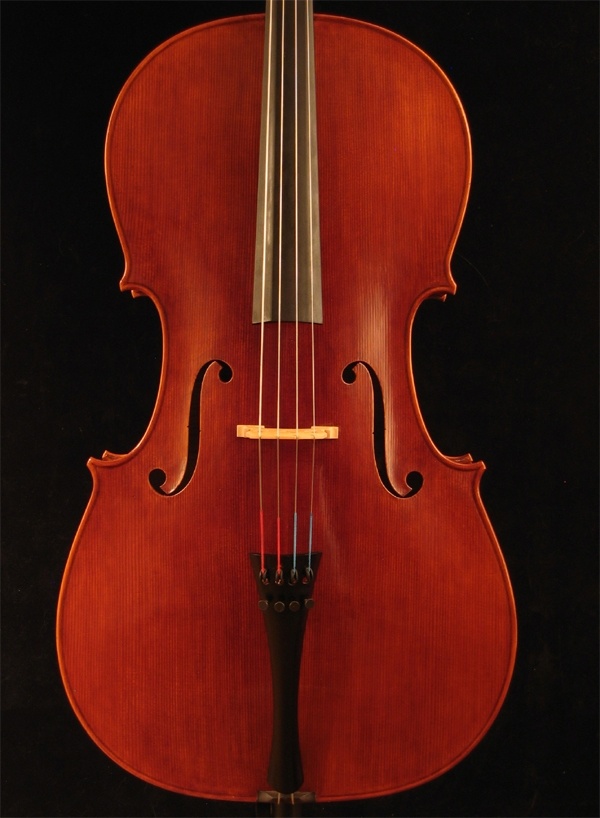 This cello by Timothy Jansma has a sweet, smooth, and rich. With solid projection and easy playability, this versatile instrument is well suited for a variety of playing styles.

The back is formed from two pieces of quarter-cut maple, marked by medium-narrow flame, slanting slightly downward on the lower half. The wood of the ribs and scroll is similar to that of the back. The two-piece spruce top has straight and medium grain, widening toward the flanks. The instrument is covered in a red-brown varnish with a pale brown ground beneath. The cello is in excellent condition.

Apprentice under the guidance of William Moennig II and William Moennig III, in Philadelphia
The shop of William Moennig and Son hired Tim Jansma as an apprentice for a summer, but by summer’s end it was decided to hire him on a permanent basis. By the end of his apprenticeship with Moennig’s in 1973, Tim had learned the advanced methods of repair and restoration, set-up and adjustments.
Before admitting a student into the program, the Cremonese school requires applicants to pass woodworking and academic testing. When Tim arrived in Italy, he did not know if he would be accepted. The school not only admitted him, they placed him directly into the second year of study due to his woodworking skills and knowledge.

Graduate of the International School of Violin Making, A.Stradivari (I.P.I.A.L.L.)
One of only three violin making schools world-wide at the time, including the Mittenwald and Mirecourt schools, Tim chose the Italian school for the influences for which it was famous. The four-year program is organized into two sections. Only those who pass a very strict examination are promoted to the upper section. Tim apprenticed under guidance of the Cremonese maker Francesco Bissolati.

Musicianship provides insight as a maker
Tim Jansma is also a competent violinist. He studied violin performance with Walter Verdehr at Michigan State University. In Philadelphia, he studied privately with Frank Costanza of the Philadelphia Orchestra. As an apprentice, the Moennig’s utilized this talent. When people wanted to hear instruments played, Tim was called in. This gave him the opportunity to see and play Strads, Guarneris and Amatis, so many of the finest instruments available. When he returned to western Michigan, Tim played for the Grand Rapids and West Shore Symphonies. Since his workload keeps him so busy in the shop, he has retired from playing professionally. Tim continues to play the violin privately, and he finds his experience as a musician gives him much greater insight as to what a musician seeks when looking for an instrument.

The Jansma Violin Shop was originally established in Cremona, Italy
A small farm near the Po River Valley was where Tim Jansma established his first workshop. The location gave him the opportunity to immerse himself deeply into the local culture. There he made great friends and completed many instruments. These early Jansma instruments were purchased by violin dealers to be sold in shops across Europe. His work today, in the shop relocated in western Michigan over 3 decades ago, is influenced greatly by his experience as a former Cremonese maker.

Tim Jansma is considered a leading authority on tonewood in Europe. and America
While living in Cremona, Tim began by travelling extensively through Yugoslavia, Germany and Northern Italy selecting logs. He processed the logs himself at his first shop, where he had renovated an old sawmill. Maple and spruce were sold to other Cremonese violin makers. The wood he selected for himself was crated and shipped to Michigan. Over the following decades, Tim continued to select logs from both Europe and Michigan and has been a dealer of tonewoods to violin makers all over the world.

Member of the American Federation of Violin and Bow Makers.(AFVBM)

This cello was made for the Japanese cellist Ko Iwasaki in 1999, patterned after his personal Stradivarius cello, and used extensively in concert.