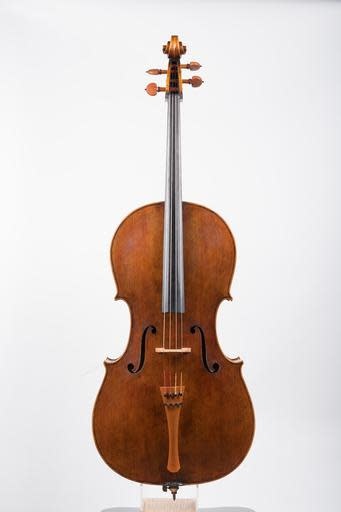 This beautiful cello by Peter Seman is light brown in color with a single-piece back. The tone is dark and rich while also maintaining its resonance and strong power. It is comfortable to play and is well balanced across all four strings.

The back is formed from one piece of quarter-cut maple, marked by medium-narrow flame slanting slightly downward towards the bass. The wood of the scroll and ribs is similar to that of the back. The two-piece spruce top has straight and very narrow grain in the center, widening towards the joint and flanks. The instrument is covered in a light brown varnish that has been antiqued by the maker, revealing a pale gold ground underneath. The cello is in new condition.

Peter’s lifelong passion for building and playing violins began when he was growing up on Long Island, New York.  A self-taught left-handed violinist, he began playing summers in upstate New York. After high school he attended the School for Fine Arts at Buffalo State College, but left school to play in a band that played traditional Bluegrass and Gypsy Jazz (Peter has been a passionate fan of Stéphane Grappelli since his youth).

Although the band was achieving local success, after 10 years Peter wanted to focus on building the instruments he so loved, and in 1984 he moved to Chicago to attend the Chicago School of Violin Making (CSVM). While enrolled there he also worked for several local violin shops, where he developed repair skills and learned the intricacies of bow re-hairing. After graduating the school he opened his own shop with a partner in 1989. Since then, Seman Violins has grown from the original two people to nine, all of whom have either graduated from the CSVM or are now attending it.  Since settling into the store’s new, larger space at 4447 Oakton St., Peter is particularly excited about the recent launch of the Seman Violins online store.

Peter’s passion for building exceptional violins has led him to make copies of some of the world’s greatest instruments. His most recent include:

Peter’s projects extend beyond violin-making as well - as a longtime player of Bluegrass, he has recently built two mandolins and two guitars.

He is past president of the American Federation of Violin and Bow Makers (AFVBM) and currently serves on its foundation board, a nonprofit that is publishing a book about the history of violin making in America entitled The American Violin.  He also serves on the board of Calipygian Players and the Chicago School of Violin Making.