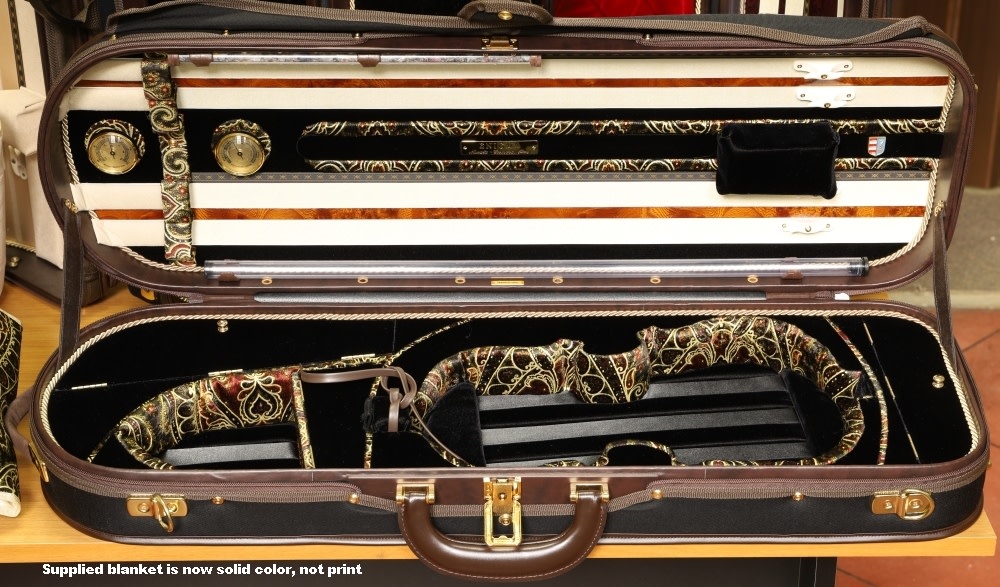 Mr. Musafia designed the original ENIGMA case, introduced in 2003, to represent the pinnacle of Musafia case making with the aspiration to be considered the best case in the world, bar none. Symbolically, it was a demonstration what he and his assistants were capable of building, without regard to anything but quality, features, finish and instrument protection.

After seven years of production sold to demanding musicians and collectors worldwide, in mid-2010 the ENIGMA was further refined to set it even more distant from the competition. Thus was the genesis of the ENIGMA Series 2. Now for 2021 we present the ENIGMA Series 3.

Compared to the Series 2, in the ENIGMA Series 3 introduces more gracefully curved interior structural partitions as the most obvious difference. Not only do they provide a more complex crush resistant structure, but they provide even more space for shoulder rests and other accessories. As a result, the main accessory compartment, thanks to a second curved partition now offers a longer storage area (and about 1,400 cm3) and is shaped to accommodate almost all shoulder rests. The compartment below the violin neck enjoys a similar space increase (to about 300 cm3), Even the compartment to the right has additional space (now about 700 cm3). The total available space for accessories is thus about 2,400 cm3 (violin model).

This optimization also helps increase instrument safety, as the asymmetric development of the interior is designed to better dissipate kinetic energy in case of accident through controlled deformation, while bolted-through steel L-reinforcements and load-bearing structural partitions add rigidity.

As before, the safety features built into every ENIGMA Series 3 (with the exception of the lighter-weight LEGGERO version) include Tropicalization™, WeatherGuard™, PressurePorts™, waterproofing, and bow tip cushions. Utility features include larger-capacity music (or iPad) pocket and a hidden pocket for important documents. High-output L.E.D. illumination of the accessory compartments is optional on all ENIGMA Series 3 cases.

The silk velvet, milled in northern Italy with an exclusive pattern designed by Mr. Musafia expressly for this case, is used for the padding while the hard surfaces are lined with coordinated solid-color velvet plush and satin. The ENIGMA AUREUM Series 3 has the interior lined in glove quality leather, monocolor velvet plush and satin. In all versions, the accessory boxes have the bottom lining in Fleur-de-Lys paper, elegant and plasticized to guarantee a long life.

Further and objective confirmation of the uniqueness of all ENIGMA cases is the fact that well-kept, pre-owned examples have proven to maintain their initial value intact over the years, when not even appreciating in value. Requiring over 24 hours of highly specialized labor to make forcibly limits the production of ENIGMA Series 3 to no more than three per month for the world market. An ENIGMA Series 3 will always be a rarity to behold, let alone to own.

Mr. Musafia and his assistants have worked hard so that you, not them, will say that ENIGMA is the best case in the world.

*pictures are an example of model*