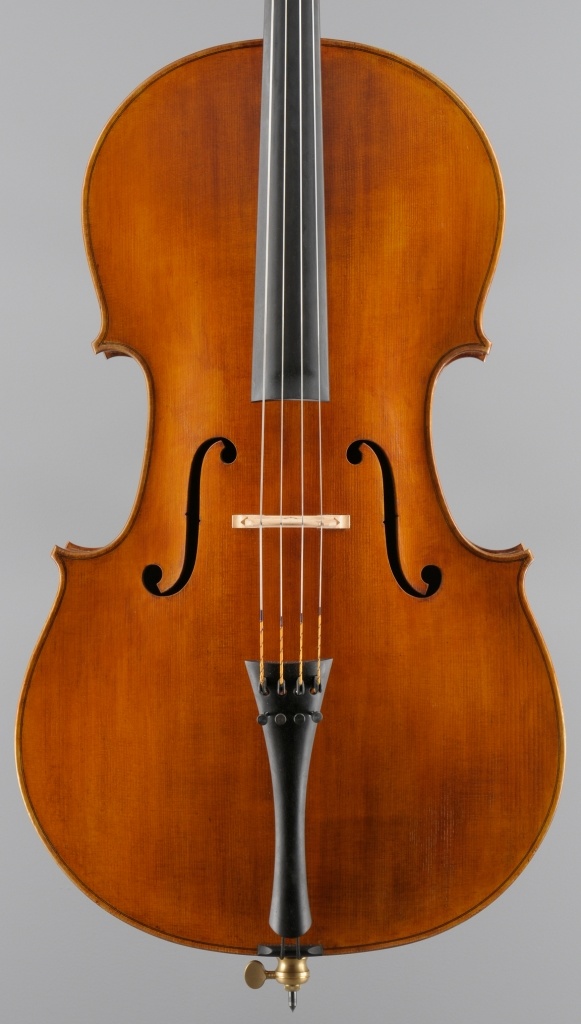 With its golden orange varnish, the “Zephyr” cello is a very powerful instrument with a deep low end and bright upper register. Its clarity, resonance, and projection make it a solid instrument for solo repertoire.

The back is formed from two pieces of quarter-cut maple, marked by narrow flame slanting slightly downward towards the sides. The wood of the scroll is similar to that of the back, with rippling on the ribs. The two-piece spruce top has straight and medium-narrow grain, narrowing towards the flanks, with slight clawing near the f-hole on the treble side. The instrument is covered with a golden orange varnish that has been lightly antiqued by the maker, revealing a pale gold ground underneath. The cello is in excellent condition.

Isabelle Wilbaux has been crafting her violins, violas, and cellos for more than three decades. Today, some of the world’s most distinguished musicians play Wilbaux instruments.

Wilbaux received her diploma in 1988 from the International Violin Making School in Cremona, Italy. She went on to study for several years with Philippe Bodart in Besançon (France) and Jose-Maria Lozano in Madrid. She then opened her own workshop, first in Tournai, then in Brussels, and finally in Montreal, where she has thrived since 1998.

Prizes and awards include:

The Violin Society of America – Various medals and prizes for tone and workmanship: violins, violas, cellos and quartets, between1998 and 2018.

Martin Héroux’s childhood memories are filled with the smells, textures, colours and warmth of wood, both in and around  his native Sainte‑Émélie‑de‑l’Énergie, and in his father’s wood shop. “Today, I realize just how lucky I was to have grown up in that environment.”

Along with those memories, there was, of course, music: traditional folk songs, music to dance to, classical music, and from time to time, some wild melodies! Songs and sounds that, when released, floated through the air to touch the souls of those listening.

Those were the influences in his life that led him to the art of lutherie. “When I think about it, I didn’t choose the craft of making string instruments, it chose me. I simply said yes. I’m very intuitive; I know when I’m in the right place. When I’m working, I let the instruments guide me, I move back and forth between violins, violas and cellos and, to tell you the truth, I love it! It’s a wonderful profession!”

Here are some of the awards he has received over the years: