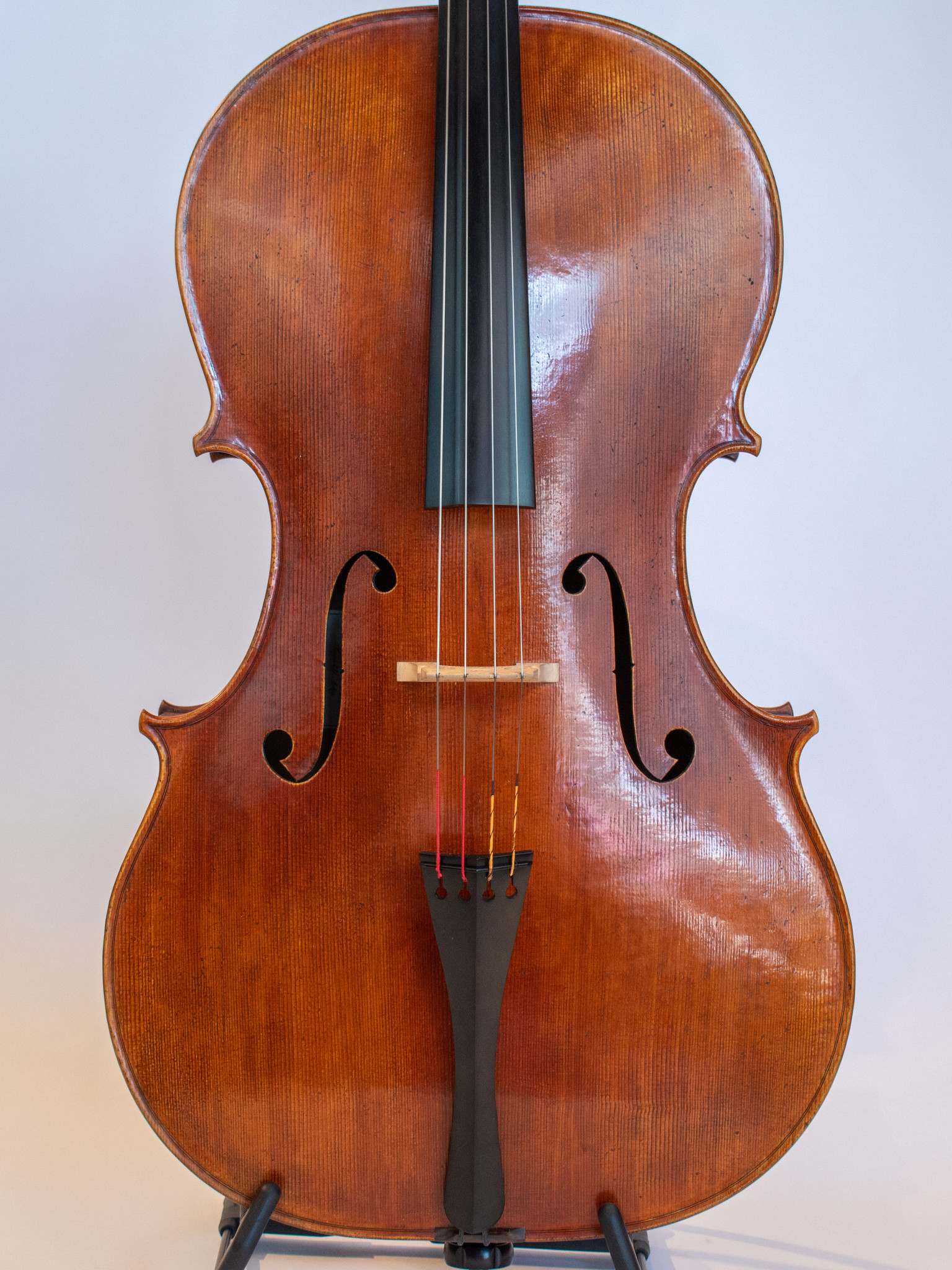 With lighter red-brown finish, this beautifully crafted American made cello also stands out with its single-piece back. The sound is resonant, powerful, and bright, making it well suited for solo repertoire.

The back is formed from one piece of quarter-cut European willow, marked by medium width flame slanting downwards on the treble side. The wood of the scroll is made from European maple, and the ribs of beech wood. The two-piece spruce top has medium-narrow grain, mostly straight and wider in the center of each half, with clawing on the treble side. The instrument is covered in a red-brown varnish that has been lightly antiqued, revealing the pale brown ground underneath. The cello is in new condition.

About the maker:
Daniel Arlig was born in Springfield, Missouri, and grew up in Minnesota, where he learned to play multiple instruments. Upon graduating from high school, he studied double bass performance at New England Conservatory of Music in Boston, Massachusetts.
Daniel went on to graduate with honors, in violin repair from Minnesota State College - SE Technical in Red Wing. He continued his training and received a degree in Violin Making and Restoration from the North Bennet Street School in Boston. After violin making school, he returned to Minnesota and apprenticed with John Waddle. For more than a decade he has focused exclusively on making new instruments. In 2018 Daniel was elected to the American Federation of Violin and Bow Makers.
Dan’s violins, violas and cellos are owned by musicians in the some of the country’s premier orchestras as well as by teachers and students at some of the world’s most prestigious music schools and conservatories. His instruments can be found across the United States and in Europe.
The viola and cello featured in this year’s Contemporary American Violin and Bow Makers Exhibition, are models of Daniel’s own design. The cello is inspired by the work of Guiseppe Guarneri ‘del gesu’ (1698-1744). There is only one known “del gesu” cello in existence today. It is known as “the Messeas” made circa 1731. Daniel’s model encompasses elements of that original cello, elements from Guarneri violins, as well as Daniel’s own considerations. This version, as with “the Messeas,” features a European willow back and beech ribs.  The viola model is inspired by violas of the 16th and 17th century Brescian masters: Gasparo Da Salo and Giovanni Paolo Maggini. The viola has a 16 inch back length, a comfortable 364mm string length and features a beautiful 1-piece maple back with matching ribs and scroll.